I have taken on a new client, the four-footed kind. 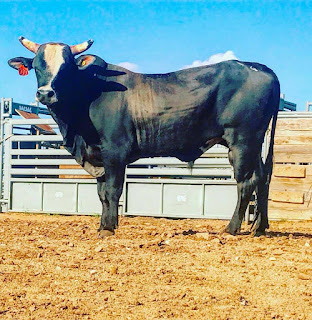 500 I'm Legit Too is owned by Army Veteran and active Fire Fighter Paramedic for the Edmond Fire Department in Oklahoma, Lance Bloyd.  It is an honor for me to work with a man who has committed his life to saving others.

His bull, 500 I'm Legit Too, competed last year in the PBR, ABBI, Border Town Casino, including PBR World Finals in Las Vegas. He finished #6 Classic Bull in the world as a 3-year-old competing against 4 year olds. He is currently 4 years old and has many years of professional bull riding events ahead of him.

500 I'm Legit Too will be competing at numerous events including the following:

We are looking for a company or person who would like to buy the rights to name 500 I'm Legit Too.  The company would be advertised at all the above events as well as on social media and websites.
For cost please email smith@smithprollc.com

I will discuss any questions or concerns you may have about a sponsorship/partnership with a top bucking bull and we will do our best to make this a type of deal you will be proud and confident in.

General Information About Bucking Bulls:
The average PBR bucking bull weighs approximately 1,600-1,700 pounds. PBR bucking bulls very rarely weigh less than 1,200 pounds but can weigh as much as 2,000-2,200 pounds. On average they live well into their teens, which is considered geriatric for any type of bull.  They are typically in their bucking prime between 5 and 6 but many buck well past the age of 10.

The spurs worn by the bull rider are required to be dulled and used only for balance, not to harm the bull in any way.  The bulls hide is 7 times thicker than human skin, so the spurs do no harm to the bucking bulls.

We must remember, these bulls are part of the family as well as a huge investment for the bull owner.  Some of these bulls are worth over $70,000 and in no way would a bull owner want to harm or distress something this valuable, personally and financially.  There are many misconceptions about bucking bulls, and I would be happy to address any you might have.

Blood Line of 500 I'm Legit Too
Sire: Kish’s No Guts. He was a PBR bull and NFR selected bull. He bucked at the PBR until he was 10 years old. Which is old for a bull at that level. He goes back to a bull called Top Gun and One called Too Legit.
Momma: his mother, Kish 443, is a daughter of PBR finals bull Kish’s Mr. Juicey. Mr. Juicey was sired by Too Legit. The bulls name comes from the fact that he’s what we call “double bred” Too Legit. Too Legit straws sell for $20,000 each and he is a legendary sire in the bucking bull business. His lineage shows up in many of the best bulls in the world. 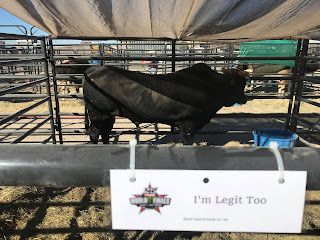 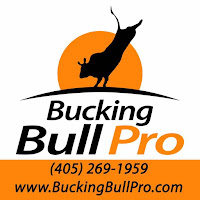 Bloyd Bucking Bulls started in Lance’s mind back when he was still riding bulls in the PRCA and living in Texas. When he first heard about Buckers Inc., he called Bob Tallman and got a price sheet for semen straws. At that time, he was in college and was spending all of his money on entry fees, food, hotels, gas and a little on tuition and books. There was none left for buying any semen straws or cattle. He still has that original Buckers Inc. price sheet today. If he had only known what we all know now.

Lance had to wait until life settled down a bit for his dream to become a realization. While on the rodeo trail Lance met his future wife. In December ’02 Alison graduated Oklahoma State University with a double major in Animal Science/Ag Education and they married in July ’03.

The newlyweds settled in the small town of Carney, Oklahoma in a house on 5 acres. For several months they spent their time settling in, fixing up their home and building pipe and cable fence in preparation for the purchase of some cattle. Finally, in November of ’03 they purchased the first of their true rodeo bred cattle, #22 Winchester Girl; a daughter of #270 Kish’s Winchester.

They continued buying cattle and quickly outgrew their acreage. In March ‘05 they moved just 3 miles down the road to a bigger home and more land. The expansion happened just in time; in December ‘05 they welcomed into the world their son, Lane Robert.

The original females in the Bloyd herd were a pot luck of cattle from different breeding programs. In the fall of 2009, they decided to take their herd in a new direction with the purchase of 5 Kish bred females. The logic behind this was to build on the success of #22 Winchester Girl, a Kish Bred female. Her son, 111 Winchester's Image, was the one standout bull that they had raised at the time. Then in 2010, they added a few more Kish females. With 3 of them coming straight from the Kish ranch in Red Bluff, Ca. The other huge addition to the Bloyd breeding program was the purchase of #190 Cash Prize in May 2010. Cash Prize was a 2x NFR bull and ABBI Classic standout. Cash Prize is currently ranked #63 all-time on probullstats.com. Cash was injured at a PRCA rodeo in California in 2007 and had to be retired.
There are currently 12 cows and 1 bull on the Bloyd Ranch that carry the K Spear brand from the Kish Ranch in California. Including direct daughters of Real Deal, Cash Prize, Spittin' Image, Winchester, Pretty Boy Floyd, Mr. Juicey and more. Information on PBR (Professional Bull Riders)
The PBR was founded 25 years ago and is aired on CBS, CBS Sports Network, Ride Pass, as well as social media and You Tube.  In 2018, the PBR awarded over $10 million-plus in prize money, including a $1 million bonus to the PBR World Champion, the season’s best bull rider as well as
According to the PBR website, "The success of the PBR has made it one of the most prolific sports on television. The elite 25th Anniversary Tour will be televised every week on CBS Sports, CBS Sports Network and networks around the world. PBR broadcasts reach half a billion households and a new digital network will bring fans hundreds of hours of bull riding and other western sports anytime, anywhere. The combination of incredible athleticism, raw sport and quality entertainment for the whole family has propelled live attendance growth as well. Annual attendance has grown from 310,000 in 1995 to more than 3 million fans each season.
In the PBR, each ride is worth up to 100 points: 50 points for the bull and 50 points for the rider if he successfully rides the bull for 8 seconds. Judges look for bulls with speed, power, and drop in the front end; kick in the back end, direction changes and body rolls. A body roll occurs when a bull is in the air and kicks either his hind hooves or all four hooves to the side. The more of these characteristics a bull displays during a ride, the higher the degree of difficulty. The other 50 points is based on how adept the rider is.”

ABBI – American Bucking Bull Industry was founded by the PBR to address the growing bucking bull industry. The ABBI awards $200,000 in Las Vegas each fall during the ABBI Championship held in conjunction with PBR World Finals.  500 I’m Legit Too competed in this event in 2018 and placed in the top ten.
The Classic champion earns $200,000 in Las Vegas each fall. In 2015, ABBI paid out $2.4 million in event prize money. Black Pearl, a former Champion, won nearly $500,000 just in his three years competing in the ABBI.
https://www.americanbuckingbull.com/

Bordertown Casino hosts events through out the year where 500 I’m Legit Too will be bucking. https://www.bordertowncasino.com/